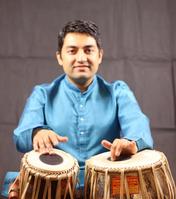 Dhwani Shah started teaching Tabla since 2006 in his teacher's school based in Chicago. Over the years he's branched out on his own teaching at music schools, community centers, and religious institutions.

Dhwani's initial learning started at the age of 8 in India during a summer trip. He continued learning Tabla sporadically over the years in Chicago. Being a 3-time grant recipient of the Ethnic and Folk Arts Master Apprenticeship Program by the Illinois Arts Council, he was able to further his studies under several teachers. During his college years, he started performing in Indian Classical Music for vocal, instrumental, and Kathak dance. Along with Tabla, Dhwani was learning percussion in his school as a member of the marching band. He studied the western 5-piece drum set which he continues to practice to this day.

Dhwani is extremely passionate about teaching Tabla as he enjoys blending traditional Indian methods with western learning systems. However, he really loves to teach as his students help him fuel his own learning.